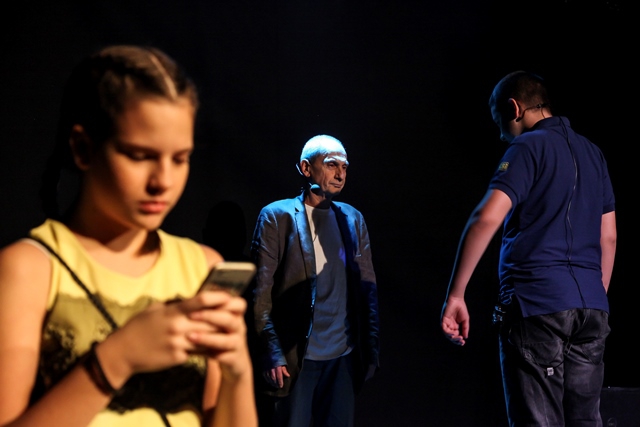 Play: 2 CHILDREN ON THE INTERNET

Program of educational theater for teenagers , organized by the Belgrade Youth Center and Studio.
Tickets are on sale through the Eventim network, web and Facebook pages Studio Center . Price of tickets sold at 500 dinars, while for school and group visits provided additional discounts.
The play 'Children on the Internet 2' , the three true stories that have happened in the last year in Belgrade and other Serbian cities, is a young population who are the biggest dangers that lurk on the Internet, mostly on social networks.

'In the clutches of pedophiles'
Three girls fall into the trap of fifty pedophiles who use social networks trying to seduce them. The bravest among them, will be addressed by the help of his mother, which in cooperation with the police discover the monster that is part of a large regional pedophile clan.

'Blue Whale'
story about a boy, addicted to internet games, which becomes conditioned to start a game infamous 'Blue Whale'. Through fifty tasks which are put before it, the boy begins to execute orders scariest, through which will be completely broken - physically and mentally. Thanks to a friend who at the last moment realizes the seriousness of the situation, the boy before the last task execution (suicide), but only managed to suspend play this creepy game.

'DESTRUCTION'
The girl, who was rejected by his girlfriend, finds solace in chatting with one of her peers through a social network. Not knowing that her friend is not the same age, became a victim of bullying from which he can not get out.

All three stories, talk about the negligence of young people, as well as ignorance of the rules of conduct on the Internet. Also, witnesses make clear how the role of parents and teachers is important as this issue is concerned. The show is dedicated to all children who have started to use the Internet, as well as teachers and parents need to be aware of all the dangers to the weather could prevent their children to be the victims of the Internet.

This production Studio Center and DOB to want to directly warn all the dangers that lurk on the Internet, but also to send a message, how to access care. We are sending a clear message to everyone that this can happen and it is important to react immediately, as the consequences would have been tragic.